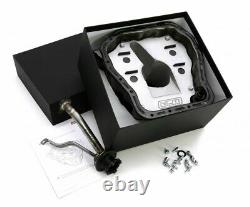 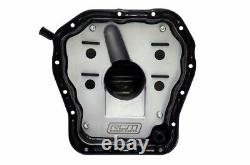 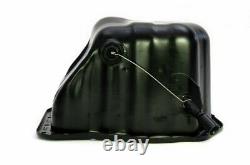 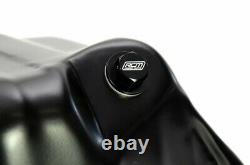 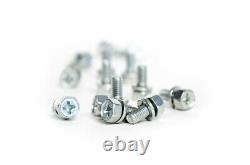 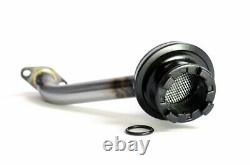 RCM GROUP N BAFFLED OIL SUMP PAN. The increasing popularity of track days and other such events coupled with the search for ever higher bhp figures has highlighted some alarming shortfalls in the standard sump fitted to the Impreza from the factory. As most are aware the sump pan carries out a vital role, collecting and storing the engine oil before being distributed around the engine lubricating and cooling as it goes. Shortfalls in the standard sump arise when the cars are used on track where oil surge when hard cornering soon becomes a major problem.

In simple terms oil surge is a result of the lateral forces being exerted on the oil pushing it to one side within the sump pan. The RCM solution is a modified'baffled' version of the standard sump pan which is designed to combat the effects of oil surge via a specially constructed hand made insert or'baffle' fixed inside the standard sump. In addition to this the top deck of the baffle is fitted with four one way valves which allow oil returning to the sump to pass through but not pass back in the opposite direction when being moved around in the sump.

The baffle insert also helps combat the unwanted'pooling' of oil in the Impreza cylinder heads (which can often happen under high cornering loads as a result of the flat boxer engine layout). Starting life as a genuine Subaru oil pan to ensure perfect fitment the RCM Baffled Sump is then re engineered removing much of the relatively ineffective standard internal shelving system and is then re manufactured to accept our specially designed removable Group N alloy baffle insert. This insert incorporates x4 heat and oil resistant nitrile one way valve flaps to keep the oil exactly where it needs to be even under hard cornering on track or during competition use. The RCM Baffled Sump kit also features an additional -8 boss for easy plumbing in of a return to sump hose from an oil catch tank system such as our RCM2030, RCM2031 and RCM2283. Supplied with full installation instructions, x14 genuine Subaru Sump bolts and one of our RCM Titanium Magnetic Sump plugs all pre lock wired and ready to go!

Supplied with our Titanium Magnetic Oil Sump Plug to attract any unwanted metallic material. Subaru Impreza / forester EJ20 engine (not suitable for EJ20 Twin Scroll JDM vehicles, such as Spec-C). IF YOUR COUNTRY IS NOT LISTED PLEASE MESSAGE DIRECT REQUESTING A QUOTE. PLEASE ALSO CHECKOUT OUR OTHER ITEMS FOR SALE. #subaru #impreza #wrx #sti #gc8 #gdb #grb. This item is in the category "Vehicle Parts & Accessories\Car Parts & Accessories\Engines & Engine Parts\Oil Sumps". The seller is "bneuropeltd" and is located in this country: GB. This item can be shipped worldwide.